Dennis P. Waters received his Ph.D. in 1990 from the Watson Engineering School at Binghamton University, where his advisor was Howard Pattee. 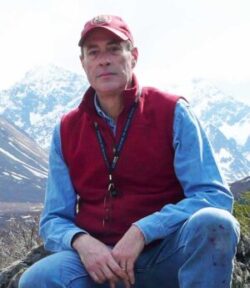 Rather than travel the academic road, Waters became a serial entrepreneur, founding and selling several technical publishing businesses. His most recent (GenomeWeb.com, sold in 2019) reached a monthly audience of 300,000 life science researchers around the world. Highlights of Waters’s media career include:

Since retiring from business, Waters has returned to the research project that inspired his Ph.D., how one-dimensional patterns of DNA, language, and computer code orchestrate the behavior of the three-dimensional world in which we live. This has resulted in Behavior and Culture in One Dimension. 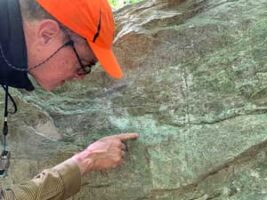 Waters is a lichenologist and Visiting Scientist in the Department of Ecology, Evolution, and Natural Resources at Rutgers University. He has published peer-reviewed research on the lichen flora of the Mid-Atlantic Region.

Waters was appointed as Municipal Historian by the Township Council of Lawrenceville, NJ, where for twelve years he conducted research and presented his findings on a range of local topics from the colonial period to the 20th century. He has served on several non-profit boards, including Birds of North America, Liberty Science Center, the Lawrence Township Environmental Education Foundation, and the Lawrence Historical Society.

“Get ready to think and then think again. This book is true scholarship in its finest form.”
Michael Gazzaniga
Director, SAGE Center for the Study of Mind
University of California, Santa Barbara
Author, The Consciousness Instinct

“With DNA at one end of his account and written language at the other, [Waters] shows how sequences have played midwife to the emergence of complex life and human civilization.”
Terrence Deacon
Professor, University of California, Berkeley
Author, Incomplete Nature: How Mind Emerged from Matter

“[Waters is] after a universal organizing principle that is independent of the embodiment of the sequence—human language, animal communication, behavior by parasites, bacteria, and civilizations are all in his sights.”
Claudia Carello
Professor & Director Emerita, Center for the Ecological Study of Perception & Action
University of Connecticut

“For language scholars, such as myself, it offers a unique, persuasive, and impactful perspective on the kind of thing that language is, offering valuable insight on how language use in the world (written as well as spoken) can do the work it does. I highly recommend this book.”
Carol Fowler
Former President & Director of Research, Haskins Laboratories